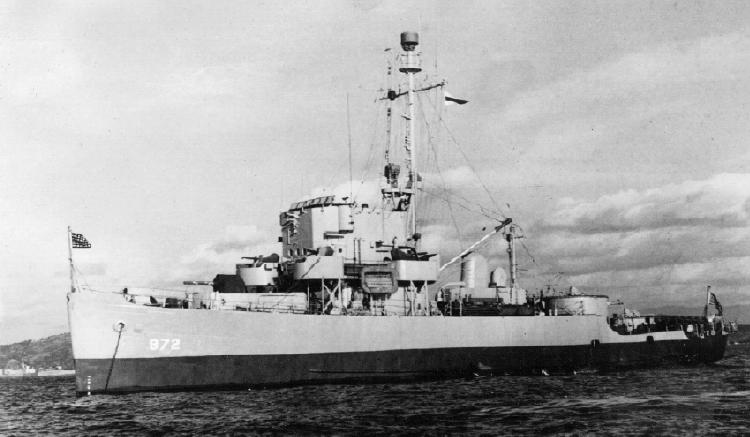 1.1 The «personal» history of the ship

MS “Sunnhordland” was built in the USA as PCE 830 (Patrol Craft Escort Chaser 830) by Pullman Standard Car Mfg., Chicago, Illinois for the US Navy, and was equipped to chase submarines during the 2. World War. The ship was lent to Great Britain and the homeport was Gibraltar. The vessel was an escort ship and submarine chaser along the west coast of Africa till the end of the war.

1947 was the ship sold to Hardanger Sunnhordlandske D/S, Norway, and war renovated carin 1948 by Bergen Mekaniske factories to a car- and passenger ferry with room for 13 cars, 600 passengers and other goods. The 22. of June 1949 the ship started in ordinary service in the district Sunnhordland: 14.30 p.m. from Bergen via Leirvik – Tittelsnes – Bjoa – Ølen – Etne to Skånevik, with return the same route to Bergen the next morning. Here sailed the ship steadily for 24 years, and became the main road between Bergen and the district for both trade and private.

In the spring 1974 the ship was sold to Oy, Fager Lines. Riistina, Finnland, rebuilt as a cruiser by Wärtsilä in Kotka and renamed MS “Kristina Brahe”. She was cruising between Helsinki, Leningrad and Tallin. In 1984 the ship was sold to Rannikkolinjat Ltd. Rebuilt in 1987 with more cabins, totally 44 cabins. August 2010 she grounded near Sulkava, but was not damaged. Thereafter the ship was sold to Saimaan Matkaverkko Ltd, Villmanstrand, and the name was changed to MS “Brahe”. During the summer seasons 2011, 2012 and 2013 she was cruising in the Finish Bay, but was docked during the winters. The ship was charted by Nordisk Cruise Line, Faaborg in Denemark for the summer 2014, and the plan was to cruise between the Danish islands, but it was no success. During the winter 2015-16 was the ship docked in Finnland.

1.2 The ship as a part of the history of Norwegian shipping

MS “Sunnhordland” was one of six PCE-vessels which were rebuild as passenger ferries for Norwegian ship owners after the 2. World War. Before roads and tunnels took over most of the infrastructure there was a tremendous need of ferries along the coast. The five other ships were MS “Haugesund” (1943-97) and MS “Stavanger” which sailed between Stavanger and Bergen, MS “Jylland” (1943-88) between Kristiansand and Denmark, and MS “Sunnfjord”(1943-83) and MS “Sognefjord” (1943- ) which sailed between Årdalstangen in Sogn to Bergen. So of these six only “Sunnhordland” and “Sognefjord” are still sailing. “Sognefjord” is today used as a diving vessel for sports divers in Malaysia.

As mentioned above, MS “Sunnhordland” sailed steadily in the district Sunnhordland for 24 years – between the mainland in the south, to the largest islands in the district up to Bergen in the north. The ship was the most important and the fastest transport during the years after the war when there was enormously building and development in the country. Cars were driven on board, passengers were sleeping their way in comfortable cabin beds, while newly slaughtered pigs hang from hooks under the deck to be transported to shops in the town. Everybody who have grown up in Sunnhordland during the years after the war, have strong and good memories about “the journey to the town” with MS “Sunnhordland”.